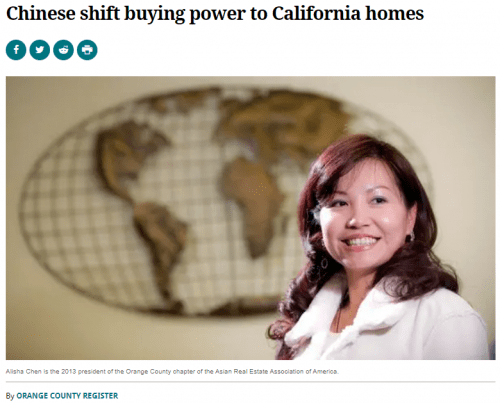 As China’s housing bubble deflates, an influx of cash deals from Chinese buyers has swept across Southern California’s home market, and one UCLA economist expects that trend to continue.

The report, authored by economist William Yu of the UCLA Anderson Forecast, expects more of these purchases from Chinese nationals.

“In terms of the bubble deflating in China, right now we’re seeing second- and third-tier cities’ real estate prices going down already,” Yu said. “A first-tier city like Shanghai or Beijing are holding their value, but I would say in the future things are looking more dismal. I would say this kind of incremental investment from China will continue for some time.”

New construction in China has fallen 22 percent, and sales have slumped 7.8 percent this year, according to a May report by Bloomberg News.

U.S. housing, Yu said, is an attractive option to Chinese buyers because they get permanent ownership of the house and the land. In China, the government owns all the land, Yu said, and buyers essentially rent it for up to 70 years.

The climate, education system and relative proximity to China have made California a popular destination for Chinese buyers.

All that, Yu said, has buyers jumping into Los Angeles and the Bay Area to snap up homes for personal use and investment purposes. Buyers have further disrupted the market by offering cash for houses, often sweetening the deal by throwing down numbers well above the asking price.

“The majority of them are fearful of having all of their assets in China,” Chen said. “They don’t feel like there’s a lot of security in their country.”

Chen, who has an office in Taiwan, said Chinese buyers aren’t as concerned about the return on investment as the Taiwanese who tend to buy multiple properties. She expects individual buyers to remain active in U.S. markets.

“The Chinese government has really been tightening up how much money leaves the country,” she said. “So we’re probably going to find more people buying $1 million to $1.5 million homes and probably multiple properties.”

Rex McKown, an agent with Surterre Properties specializing in $10 million and up homes, said Chinese buyers accounted for about 35 to 40 percent of his company’s business in 2013.

“Last year we were inundated with Chinese buyers,” McKown said. “This year has been amazingly slow, so I’m not really sure how to judge it. They seem to come in waves.”